Dumont Borough Hall is open to the public by appointment only. We encourage all residents to address as much borough business as possible remotely. If an in-person appointment is necessary please call 201-387-5022 and follow the prompts to schedule an appointment with the appropriate department. A list of Borough Departments can be found here. Due to the ongoing COVID-19 public health crisis Dumont Recreation has been postponed and our Senior Center will remain closed to the public. To find more information and updates, please visit https://covid19.nj.gov or https://www.co.bergen.nj.us/health-promotion/2019-novel-corona-virus.

A Brief History of the Borough of Dumont 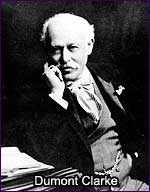 Incorporated as the Borough of Schraalenburgh in 1894, Dumont took its present name in 1898 from its first mayor, Dumont Clarke, who was president of the American Exchange Bank and had made his home in the borough since the 1870’s. Clarke and his six councilmen spent $200 for the expense of running the borough that first year. The mayor personally financed this amount until taxes could be collected, and his loan to the borough was repaid. The first two ordinances enacted within Dumont prohibited driving on sidewalks within the town, and banned horses, sheep, swine, goats and cattle from being pastured on any street, sidewalk or public square.

Over 95 years later, Dumont is still governed by one mayor who serves a four year term and six council members each elected to three year terms. Over $10 million is now budgeted in order to run the borough and ordinances deal with more modern concerns such as parking and recycling. 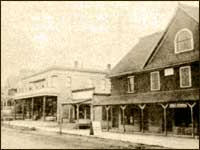 Long before any organized government, the land which has become Dumont once belonged to the Tappan Indians, who were generally located around what is now known as Bergenfield and northward. On June 8, 1677, a deed was signed by the Tappans granting David Des Martes, a French Huguenot, 7500 acres of land stretching from the Tenakill Creek in what is now Tenafly to the Hackensack River.

This low ridge of land was dubbed "Schraalenburgh" which means "scraggly hill" in Dutch. These early Dutch residents lived mostly in stone farmhouses and were members of the Dutch Reformed Church on the Green (near Hackensack Court House). 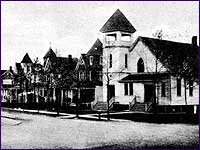 A fraction of this congregation separated from this church and formed the True Dutch Reformed church at Schraalenburg in 1724. A worship house was erected about 200 feet east of the present South Presbyterian Church in Bergenfield. Again, in 1799, some of the congregation decided to form their own church and build the Dutch Reformed Church in 1801. Today this historic church still stands at the corner of Washington Avenue and Madison Avenue, and is called the Old North Reformed Church.

Many prominent families moved to the Northern Valley area when railroads opened after the Civil War. A line running from Ridgefield Park to Tappan, New York, was the first running through the Schraalenburgh Valley in 1873. The railroad brought an influx of commuters and developers and the call for local improvements and autonomy resulted in the borough's incorporation in 1894.

The next big population increase took place in 1917, when Camp Merritt was established along the eastern border of Dumont. Businesses sprang up overnight to meet the soldiers' needs and a railroad for camp supplies was sliced right through backyards and front lawns across the upper end of Dumont. 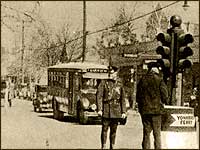 After World War I, most of the barracks for Camp Merritt were torn down or destroyed by fire, and Dumont became a quiet, residential town again. Modern conveniences of city water and electric street and house lights were introduced at the turn of the century. Households and gas connections were made by 1910. A secondary sewage treatment plant on the land, which is now Twin-Boro Park, allowed for installation of sewers in 1926. The Dumont Police Department was formed in 1921, and officers were compensated $1 for each arrest. Today's force has a staff of over 30 and a police reserve was formed in 1897, and that same year the borough purchased its first hook and ladder engine which pumped water from wells and brooks. Today, Dumont still relies on dedicated volunteers to man its fire department and ambulance corps. 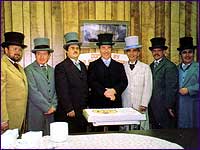 The public school system in Dumont began in 1800 when a one-room school house was built on a lane near the Old North Church. Today's school system educates over 2,000 students in five buildings. Lincoln School, built in 1912, is located in the southwest section of the borough and houses students in K-5. Charles A. Selzer School, on Prospect Avenue, was erected in 1961 and is used by students K-8. Grant School, on Grant Avenue in the northeast section of town, built in 1911, holds classes for students in grades K-5. The fourth elementary school, Lovell J. Honiss School, circa 1955, is located on Depew Street in the southeast district, and is attended by students grades K-8. Dumont High School was built in 1928 and was added on to in 1955 and 1961.